Here's a painting I did years ago: 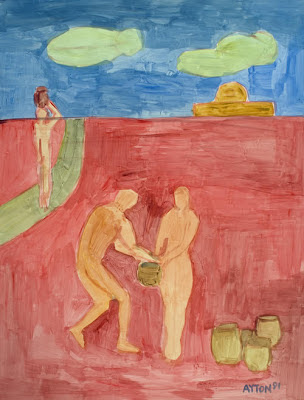 From the Universal Declaration of Human Rights series, done in 1991. The exhibit toured around Europe (England, Holland, Spain) in the early 90s & the USA in the late 90s (Chicago, Minneapolis, San Francisco, Washington DC & New York) for the 50th anniversary of the UDHR. The image depicts the right to work. I just licensed the image as a book cover for an academic publication. I'll post more details (inc. the cover?) here later...

You can see the rest of the series here.
Posted by William T. Ayton at 6:08 AM