I got back the proof of the art book: while it looked good, there were some things I wasn't happy about. So, I've revised it & reuploaded it & ordered another copy. There were some layout changes that I've fixed, & a few images that I changed for better ones. With 104 pages, a lot can go wrong, but I hope this is it. I'll know in a few days.
Posted by William T. Ayton at 8:18 AM No comments:

Here's the final double-page spread from the forthcoming AYTON book. It shows the drawing & painting of "Man O' War" -- the drawing was from 2003 & the painting from 2004. I occasionally make paintings based on or inspired by drawings, but most often the painting or drawing happens on its own. On a very few occasions, such as the Narcissus series, I return to an image several times in either or both drawing & painting. 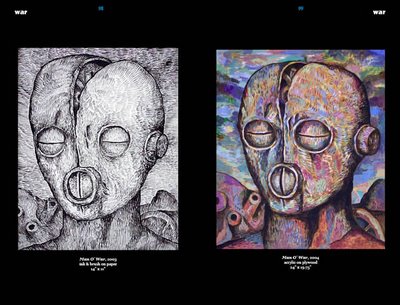 Posted by William T. Ayton at 4:05 PM No comments:

Here's another spread from the forthcoming book -- this time from the "scapes" section. That's short for landscape, cityscape, seascape, etc, & covers a multitude of sins (sometimes literally): 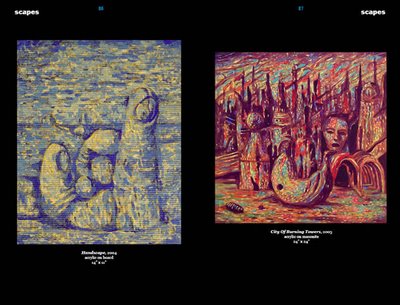 The images are: "Handscape", 2004 (landscape with deformed hand) on the left, & "City Of Burning Towers", 2005 on the right. That should give a little bit of an idea of the range presented in this section...
Posted by William T. Ayton at 3:32 PM No comments: 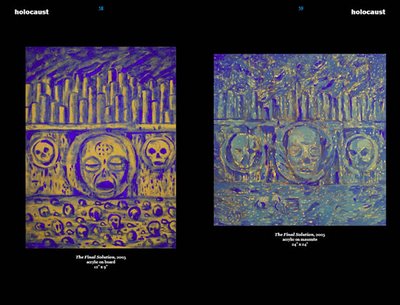 Posted by William T. Ayton at 8:35 AM No comments: 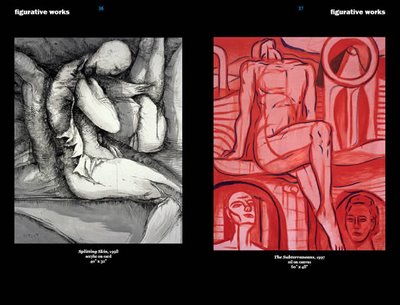 Here's another spread -- pages 36 & 37 -- "Splitting Skin" (1998) & "The Subterraneans" (1997). Both from the "figurative" section (a somewhat arbitrary category) -- again, shows the contrasts between the images, which are rendered stylistically differently, yet have much in common. My figurative works tend to emphasize the nobility of the human spirit.
Posted by William T. Ayton at 8:22 AM No comments:

Here's a sample from the AYTON book -- pages 6 & 7, featuring "The Deluge" (1998) & "Democracy" (2006). This is from the "apocalypse series" section, which pulls together images with themes of creation|destruction etc. from various periods: 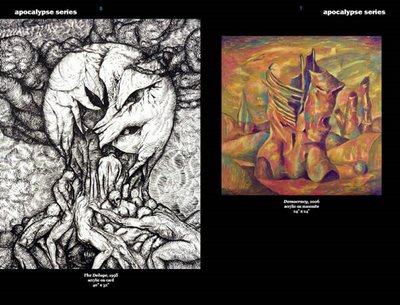 It's always interesting to place 2 disparate works side by side & find out if they work together or not. Often, they play off of one another in unexpected ways...

When I see the proofs in about a week, I'll be able to make some more decisions about selection & placement. So, the book may change a little or a lot.
Posted by William T. Ayton at 8:14 AM No comments:

Here's a sneak peek at the cover of my latest (and, hopefully, last for a while) publication. I really have to get back into my studio & make some new art, if only because I have a solo show coming up in the fall (Barrett Art Center, Poughkeepsie). 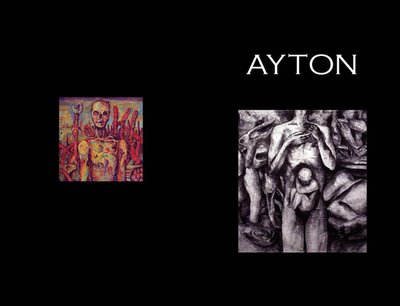 That's the full, wraparound cover. There's only my surname in big letters (I spent about 20 minutes tweaking the kerning on that alone) and a couple of images. The one on the front is a detail of "Duino Elegy 3", by the way. The Duino Elegies are, of course, Rainer Maria Rilke's epic cycle of 10 poems. I'm only happy with about half of my paintings (done in '99), so the rest are on my to-do list. Actually, that's quite a list.

The publication is an art book/extended portfolio/artifact -- there's almost no commentary except for the titles & stats on the pieces presented. I like to let the art speak for itself as much as possible. That might be a mistake, as people often misinterpret images according to their own conceptions & preconceptions, but then the misinterpretations themselves can be interesting. Additionally, I often don't have a clear "meaning/s" for my artworks -- they tend to be allusory rather than concrete. That may not make complete sense, but few things do...(gazes off into distance for a while)

As it currently stands, it's 104 pages & covers most of my artistic output over the last 15 years or so. It's arranged into 11 sections: apocalypse series, black paintings, duino elegies, figurative works, heads, holocaust, mythologies, primitive series, scapes (landscapes & others), UDHR (Universal Declaration of Human Rights), & war. That seems to cover most of it. Of course, a few items overlap categories, but that's just like life, & what can you do?

It'll be released via Lulu.com, as with the other portfolios. It's not the cheapest way to go (per unit), but at this point makes more sense than printing up thousands & then having most of them sit there for a long time.
Posted by William T. Ayton at 7:23 AM No comments: 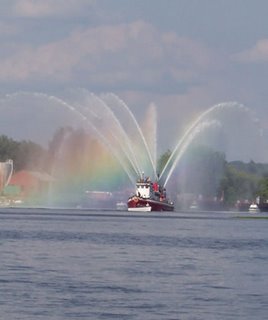 To break up this blog a bit, here's a diversion. This afternoon I went for a brief sail on the Hudson with a friend in his 20-foot dinghy. The water was pretty calm & it was a beautiful day.

Previously, with Diana & the kids, I'd seen the renowned fireboat John J. Harvey in Rhinecliff, as part of the festivities for "Rhinecliff Day", so when we were going up the Rondout Creek in Kingston, heading for the river, it was not a surprise to see JJH with its water jets jetting at full tilt. We wound up getting a little too close -- we got soaked to the skin as we passed by.

Still, it was great to see the plucky fireboat (it was called into service on 9/11 to put out fires that were inaccessible except from the river, I believe). I caught the rainbow effect in the photo, with the light filtering through the massive spray.
Posted by William T. Ayton at 5:53 PM No comments:

Here is the sketch that eventually became the painting "Helm Head" (see Portfolio #1): 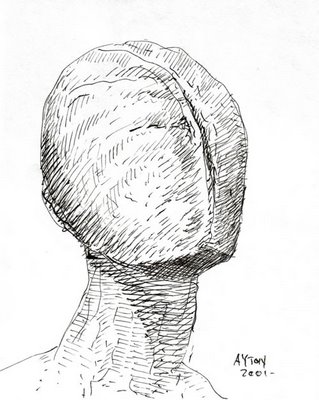 Here's one of the previously unseen images from the "Small Drawings" portfolio: 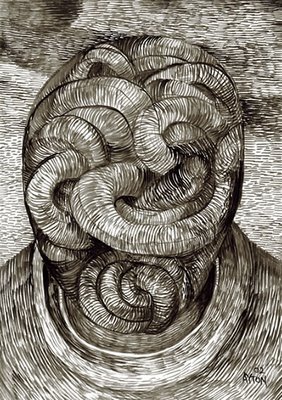 The proofs came in & loook good, so the wait is over. The "Small Drawings" portfolio is now available online at Lulu.com. 36 pages of b/w drawings from 1991-2005, printed in color ink for added depth. Price is $12 plus S&H. Here's the cover: 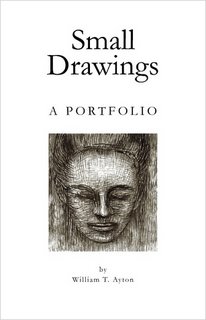 And here's the description I put on Lulu:

These are small black & white drawings that either relate to larger, finished pieces, or exist as standalone works. The pieces show a lighter touch and are more experimental than some of his more finished artwork.

Please note -- the images in this publication are monochrome, but printed in full-color to enhance their tonal range. They are *not* color drawings. 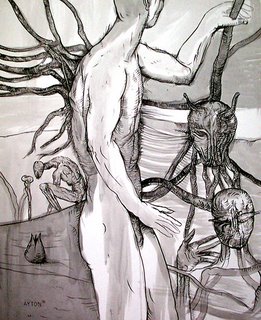 Here's a monochrome work (large drawing done in acrylic paint?) that hasn't been seen much -- part of the reason for doing this blog was to put up obscure works, so here you go. It was done in '98 as part of the "Apocalypse" series. That was a bit of a misnomer, as it was really about the end of the millennium, but "Apocalypse Series" had more of a ring to it. In this piece, I was basically riffing on the idea (more than the image itself) of Bosch's "tree man" in the right-hand panel of the Garden of Earthly Delights triptych. I love Bosch for his endless imagination & inventions -- one painting by Bosch has as much invention as Dali's entire career...OK, that's an exaggeration, but I think you know what I mean... 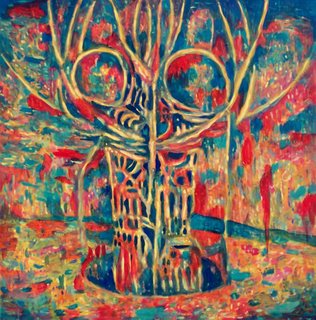 Probably a finished piece, but maybe not -- might do some more work on it. I've been working on this on & off for about 6 months now. More off than on.