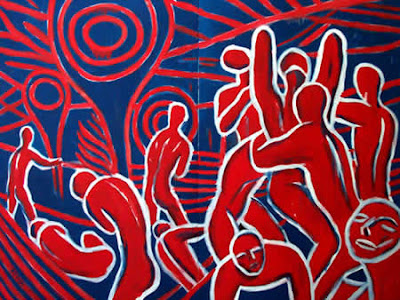 Many thanks to antiwarartists.com, who have just created a gallery for me on their very intersting site. It's a very nice selection of my anti-war & political pieces & always interesting to see my work in a different configuration & context. Be sure to check them out, they have a number of interesting artworks & artists on there...

antiwarartists.com/gallery/index.php?album=Bill+Ayton
Posted by William T. Ayton at 4:30 PM No comments:

Here's a painting from 1999 I'd half-forgotten about...that's about 10 years ago already. Done in Brooklyn. 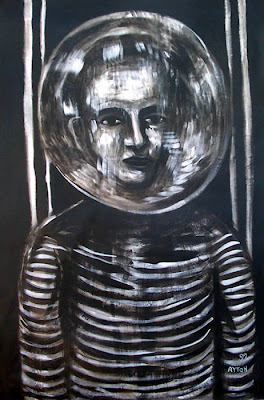 This is to announce that finally the art/poetry book collaboration with Eliot Katz (see left sidebar) is approved & is going into general distribution. At this point, it is only available via the online printer, Lulu.com at the following link: Cover price is $18.00. It takes some time (a few weeks) to become generally available on Amazon, etc. I'll post the links for Amazon, B&N etc. when they become available.
Posted by William T. Ayton at 11:32 AM No comments:

Head of an Old Man 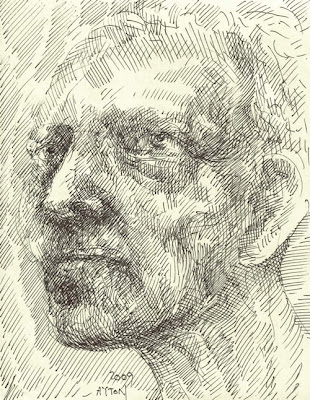 A fairly loose ink sketch. Actually, calling it a "sketch" might be a bit of a misnomer, as it's fairly well realized...blurring the boundaries again (?) I guess...

I just had an idea, which occurred when I mistakenly published the post below -- I mistyped "blog" as "blob", so for a few moments the post read "Narcissus Press New Blob", which was kind of funny until I corrected it a minute or so later. Then, I got to thinking -- would a "Blob" be a good metaphor for a different kind of (not-so-linear) blog space where you could put all your ideas, photos, videos, etc.? I'm envisioning a big 3-D bundle of stuff, something like Google Earth -- a big globe where the "countries" etc. could be postings of various kinds, with the important ones being "mountains" or something like that...there could be virtual cities & so forth & you could zoom in on the content to view it. Hmmm...maybe this is kind of like "Second Life" or whatever it's called, the virtual planet thing...

Anyway, there it is. Could revolutionize the Internet. Run with it, if you like, I don't really have the time or inclination. I think it's a pretty good idea...though, of course, maybe someone's already doing or done it & I just don't know about it.
Posted by William T. Ayton at 6:28 AM No comments:

Part of the reason is that this blog is becoming full of status announcements for the new poetry/art book with Eliot Katz ("Love, War, Fire, Wind: Looking Out from North America's Skull"), so I'll be putting those in the new place (though notice how I just snuck another one in). Also, we hope that the authors/poets will post from time to time if they have readings, events, other things published, & so forth. Stay (as they say) tuned...
Posted by William T. Ayton at 6:21 AM No comments:

The book collaboration with Eliot Katz (poetry) & myself, entitled "Love, War, Fire, Wind: Looking Out from North America's Skull" is very near to being released. After looking over the most recent version, I noticed that the back cover, while having the ISBN & bar code firmly in place, lacked 2 things: descriptive text for the category of book ("poetry/art") & the actual price in human writing (as opposed to bar code talk), $18:00 USA. These items are apparently quite important. So, I've put them in:

Eliot doesn't have his version of the book yet, though I ordered them minutes apart (but just before the weekend, so go figure). If he OKs it, I shall order the final version, have a quick look, then release it into the world to let it fight with the other little books out there. Should be around a week to 10 days & it will be out there...
Posted by William T. Ayton at 5:27 AM No comments:

Airship Attacked by an Octopus 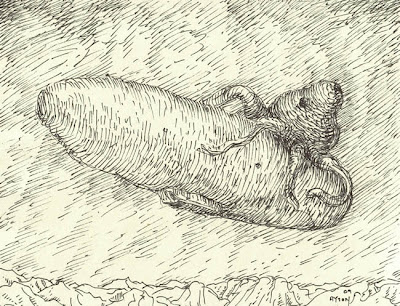 Friends sometimes ask me (& this is true, it happened the other day -- this is for you, Jim) where I get my ideas from. I usually avert my eyes, look at the floor, cough a bit, & say something like, "Oh, they just pop into my head", which is true, but sometimes I can trace the ideas back a bit. Like this one.

Taking the somewhat innocuous example of the giant octopus attacking the airship (or the regular-sized octopus attacking a very small airship), one might wonder what the hecking heck I was thinking bringing them together like this. I might wonder that, too, usually, but this time I can trace the elements back to their source, or something like that.

The octopus: I was looking idly at Wikipedia following links from something to some other thing. I found I was reading about the British comedy series "Blackadder" (long a favorite of mine, though I rarely get to see it, except bits on YouTube), & I came upon the phrase "magnificent octopus", which was a comedic corruption of "magnum opus" ("great work", masterpiece). So, that sort of stuck in my mind, especially as Eliot Katz's & my "magnificent octopus", "Love, War, Fire, Wind" is due to come out soon...

The airship: just the other day, I did another drawing entitled "Shipwreck in the Mountains", which in itself was loosely based on the idea that Noah's ark might still be intact on Mt. Ararat. So, the idea of a shipwreck stranded in the mountains has an odd sort of logic to it. I thought the drawing of the wreck reminded me a bit of an airship in its structure: 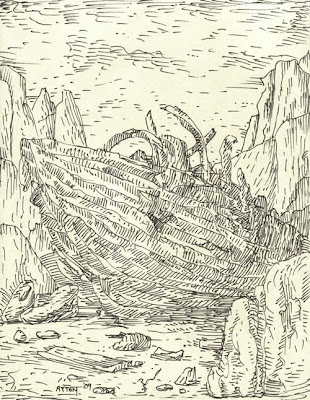 Also, possibly (& here I'm just guessing), the suggested wrecked superstructure of the wreck reminded me a bit of an octopus' tentacles. And then it popped into my head, an airship attacked by an octopus. The rest is history. 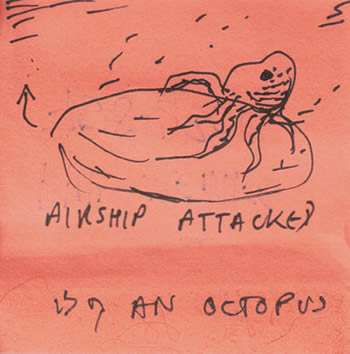 The original sketch idea on an orange sticky note.

So there you have it. By following this simple process of word & image association, you too could create a surprising drawing. It's up to you.
Posted by William T. Ayton at 11:06 AM No comments:

Lonely Figure in a Rocky Landscape 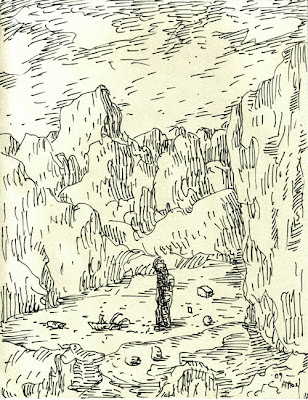 Eliot Katz reads his poem, "Letter to Allen from North America's Skull", from the book, "Love, War, Fire, Wind: Looking Out from North America's Skull" (Narcissus Press, 2009, with color cover & interior b/w artwork by myself), at an Allen Ginsberg poetry festival in Woodstock, NY, in October 2008. Event hosted by Shiv Mirabito. Unfortunately the lighting is not optimal, but I think the poem comes across well. Eliot is holding a pre-release copy of the book.
Posted by William T. Ayton at 11:52 AM No comments: 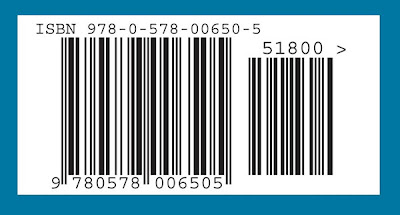 The above image may not be very exciting to you, but it is slightly more so to myself. Yes, we have the ISBN (International Standard Book Number) for "Love, War, Fire, Wind: Looking Out from North America's Skull" by Eliot Katz & myself, soon to be published by Narcissus Press (see link in left sidebar of the blog). Here is the actual number: 978-0-578-00650-5. Hope you can remember that.

Fun Fact: you can get your own barcode here:

That's where I got the one above. They make no guarantee of anything, legally speaking, so please don't sue them or me if your ISBN bar code doesn't come out so good.
Posted by William T. Ayton at 10:47 AM No comments:

Sketch -- Head With Eyes Down

Another pen sketch on a scrap of paper: 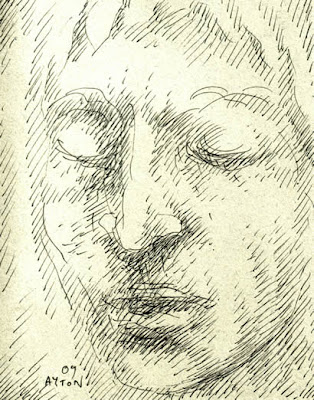 Posted by William T. Ayton at 4:19 AM No comments:

A jigsaw for you, from PuzzleBee, via my Facebook page...

Create your own puzzles at PuzzleBee.com! 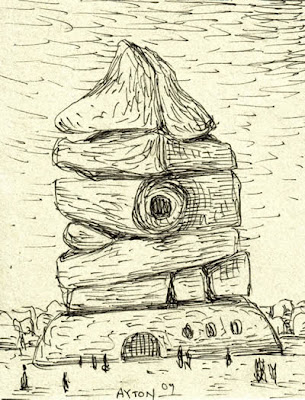 Just a little ink sketch on a scrap of paper. Thought I'd put it up here.
Posted by William T. Ayton at 11:43 AM No comments: 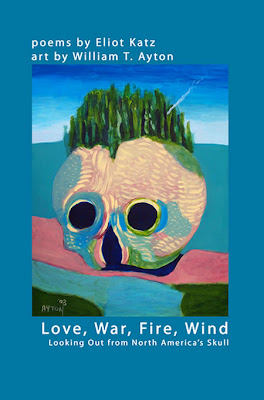 Just a note to say that the ISBN (International Standard Book Number) has been ordered for "Love, War, Fire, Wind: Looking Out from North America's Skull" by Eliot Katz & William T. Ayton (aka me). It will take several days to arrive, then a test copy will be ordered up & printed. If all is well, the book will go live & into the distribution channel, & should be available most places where good (or very good) books are sold. Stay tuned -- more info will be posted when known.

BTW -- here's that book preview page again.
Posted by William T. Ayton at 8:36 AM No comments:

The below images represent some new, fairly rapid sketches which may or may not turn up in a series of new, large paintings I intend to produce (famous last words, etc.). I find it useful to crank out these things semi-automatically, let them sit for a day or two, and then sift through them. This is the unfiltered feed. I may decide that some or all of them are not very good (or otherwise), but I think I'm going to let them stay here in any case, to give some kind of insight into my creative process. They are all done on the good old "fine granite paper", with some "manga pens" that I purchased on a whim a while ago. The paper size is 11" x 8.5". I have increased the contrast (auto levels in Photoshop) to help the images stand out better. 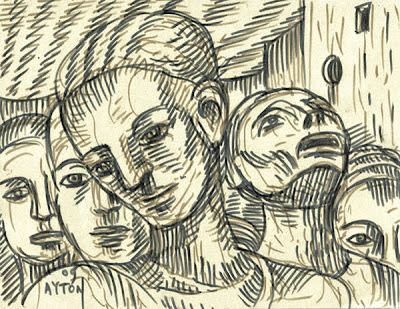 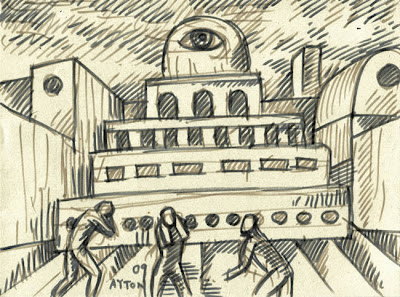 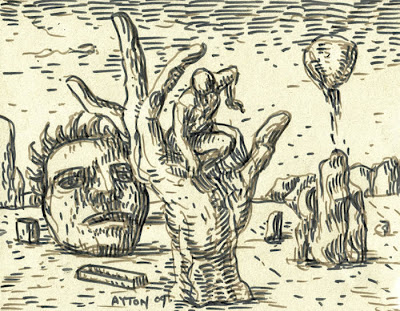 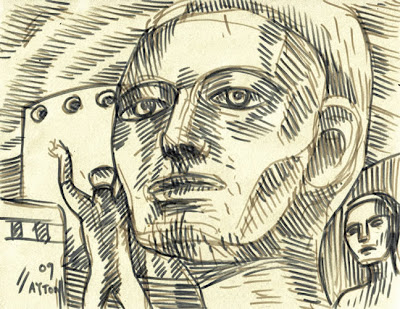 "The Witnesses" postcard at the Museum on the Seam 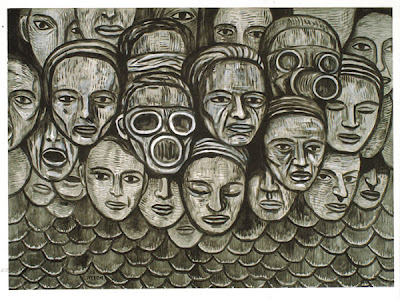 Exhibit A: the postcard of "The Witnesses" (above)

Exhibit B: detail of the back of the postcard (above)

I'm not sure I mentioned this before, in fact I don't believe I did. The Museum on the Seam (Jerusalem, Israel) produced a fine-quality art postcard of the "Witnesses" (from The War Room) b/w acrylic study that was on exhibit there from October 2007 to June 2008 in the "Bare Life" show. It can be purchased from the museum's "shop" web page, alongside postcards of works by Anselm Kiefer, Sun Furong, Haim Maor, Carsten Höller & others. I don't receive any residuals from the sale of postcards, but I thought it would be good to mention the Museum on the Seam again, as it's a great "boutique" museum specializing in political art & deserves wider attention.

Here's the URL for the Bare Life postcards page: