I just took this new one up to the Limner Gallery in Hudson NY for the upcoming "Show of Heads". I believe it's currently displayed in the window. It came out well, it kind of has an amber glow about it, which offsets the post-apocalyptic subject matter a little. I took this photo outdoors, on the back deck by the kitchen window, trivia fans.

Interestingly, I've had two paintings published on book covers recently (in the last year or so, but Covid has slowed things down, so I only recently received them). Both paintings were from the same series, created in 2019 (called the Revelations series). Both authors are young, one is French-Lebanese (Paul Rizk), the other is Italian (Enzo Ciruolo), so, both basically European. Even the names of the books are slightly similar, "Sette Occhi" & "Occimore", though they are in different languages & have different meanings. Life is full of coincidences...

Posted by William T. Ayton at 7:22 PM No comments:

The Collapsing Edifice of a Dream

Another one of my more intricate drawings, done today, using soluble carbon instead of ink. In some ways it's a bit easier to use.

Posted by William T. Ayton at 5:56 PM No comments:

This is a little head I sculpted today in Blender. It's quite a simple artwork. However I was experimenting with lighting & textures, which gave the piece a lot more depth & interest than just the bare sculpture. These are various versions of the piece...the red one was more post-processed than the others. 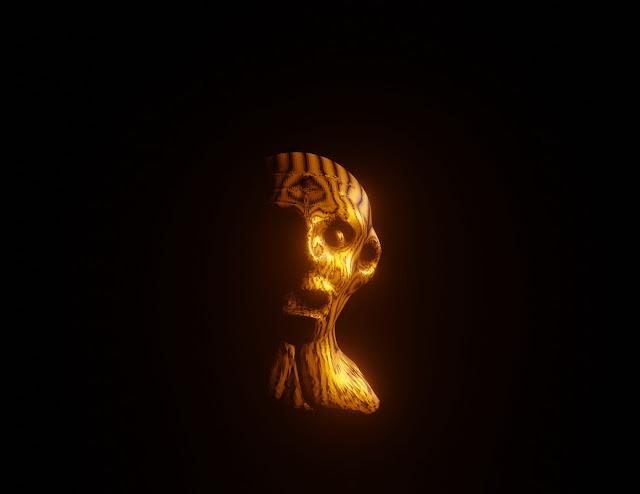 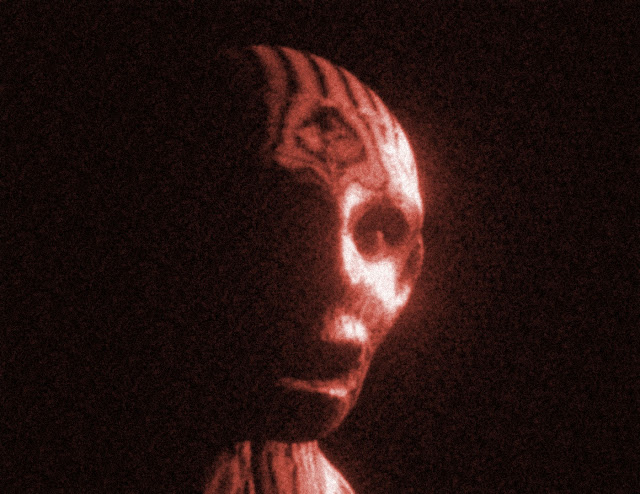 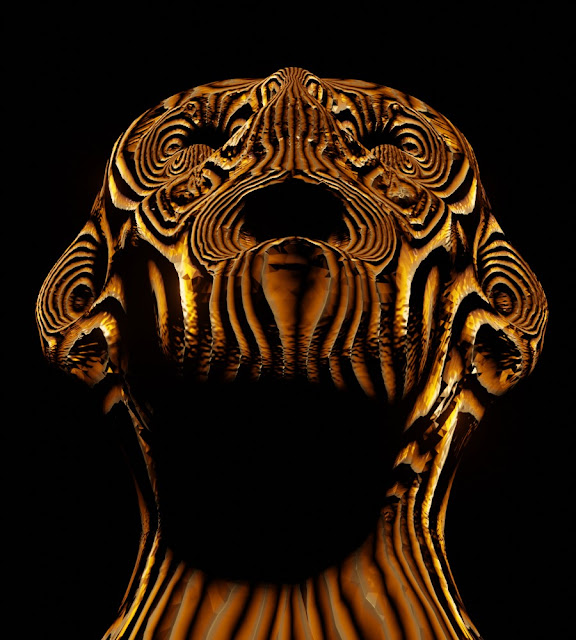 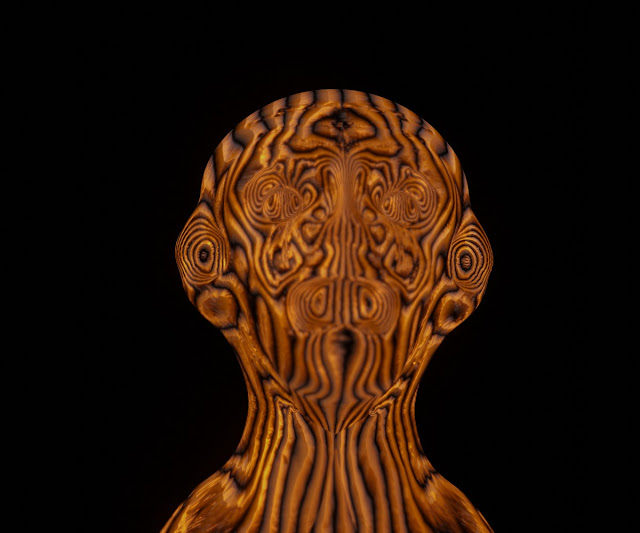 Posted by William T. Ayton at 2:33 PM No comments:

As part of a series of mythological figures that I've worked on over the years (drawings & paintings mostly), here is a digital sculpture done in Blender. I'll probably be reworking some of my other themes in coming days & weeks...\

Posted by William T. Ayton at 6:09 PM No comments:

The Dream Wings of Night

An important thing about the Blender 3D digital sculptures that I make is that they can be almost endlessly recomposed, textured, lit, post-processed and so on. Like a photographer or painter with a favorite subject, there are infinite variations to be discovered and displayed. (See previous posting for another version of this one.)

Posted by William T. Ayton at 1:02 PM No comments:

The Mists of Time

A new variation on the "winged head" theme...going back to classical mythology (Hypnos, Morpheus) & Symbolists like Fernand Khnopff...post-processed with noise & reducing of contrast.

Posted by William T. Ayton at 2:14 PM No comments:

The good thing about sculpting in Blender (& sculpting in general), is that with a 3D object you should ideally have a multitude of angles from which to view the piece & appreciate the interplay of forms.

With Blender's texturing, lighting, coloring etc., options, the possibilities are multiplied. Add to that the ability to insert a background image or objects, & then post-process (I set the image levels to "auto" & added noise), & you can almost endlessly recycle the images and find something new to present.

I also like the way the exposed mesh structure of the piece in places can resemble chisel marks, giving the work a handmade quality of sorts, whilst still maintaining its digital origins.

Posted by William T. Ayton at 5:40 AM No comments:

This is a 3D rendered image created in Blender of 2 angels (of the somewhat terrifying, Rilkean variety) coming to an agreement of how to share the mundane world, perhaps. That's what seems to be happening here, but I never really know. I prefer to allude to narratives and let the viewer fill in the rest, which makes the piece more interactive, I think.

Posted by William T. Ayton at 5:31 AM No comments:

I've been working on a series of around 20 (currently 18 done as of this writing) drawings that I've entitled The Chaos Series, as the intention was to do something more intense, improvised & chaotic than my usual work (which can often also be described in the foregoing terms to some extent). So, these are taken to some kind of an extreme & with little forethought, which might be a good recipe for disaster, but so far I'm liking the results. Here is one example, the rest are in an album on my Flickr.

Posted by William T. Ayton at 4:59 AM No comments:

Head for a Pietà

This is a 3D digital sculpture done in Blender. It seems to have a quite strong emotional resonance.

Posted by William T. Ayton at 9:32 PM No comments:

Another rendering of the Angel Manipulating Spheres piece:

Posted by William T. Ayton at 2:43 PM No comments:

Close-up rendering of the Angel's hand (from Angel Manipulating Spheres). Hands are difficult & time-consuming to sculpt, and this one came out quite well.

Here is another view of the piece:

Posted by William T. Ayton at 2:08 PM No comments:

This was done in Blender using a winged head I sculpted a short while ago. I added a partial body & gave it a metallic gold texture, then lit it with an HDRI (high dynamic range image) as well as a sun light. By experimenting with the lighting, HDRI placement, composition, etc., I came up with the following images. The only difference between I & II is the rendering engine used (Eevee in the first, Cycles in the second). The results were suitably ethereal & heavenly, I think.

Posted by William T. Ayton at 4:41 PM No comments:

A new version of Resilience Rising, done in Blender to be used in A-Frame web format. This is a work-in-progress, more soon.

Posted by William T. Ayton at 8:30 PM No comments:

I recently did a sculpture workshop for students at ASU (where I teach Blender & XR artwork). I started this head in the Zoom workshop to demonstrate Blender's 3D sculpting capabilities, & finished it afterwards. It usually takes me several hours to sculpt a head, & the workshop was around 45 minutes.

Below are 3 versions: top; fully textured: middle; another variation against a cloudy sky: bottom; the sculpted heads in raw, untextured state. 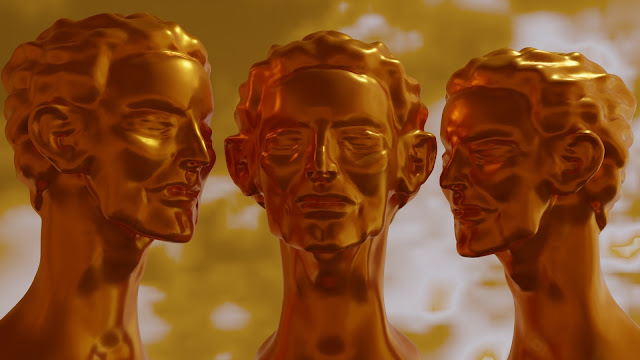 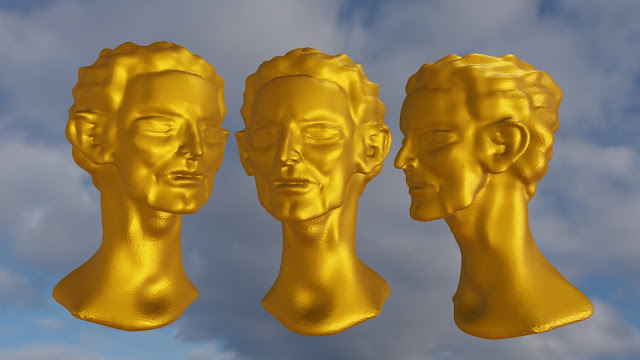 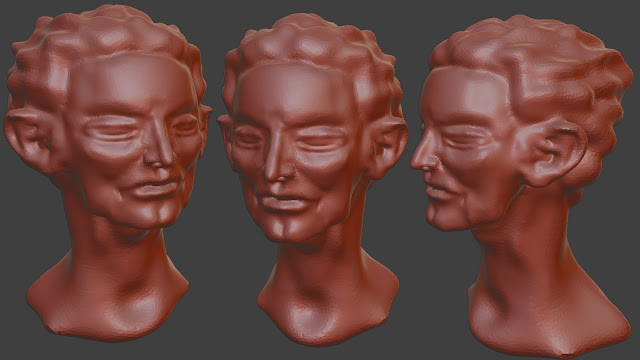 Posted by William T. Ayton at 4:48 PM No comments:

Here is the cover of "Occimore" by Paul Rizk, a young French author. This book was published a few months ago & I should be receiving a copy soon, more details when I get it...

Posted by William T. Ayton at 4:16 PM No comments:

Thanks to Enzo Ciruolo in Italy for sending me a copy of his book "Sette Occhi" with my painting of "The Creature with Seven Eyes" on the cover. This is his first published novel, I believe, so congratulations to him. Also it was a prizewinning entry in a competition. As far as I can make out, via my lack of Italian, it's a noir mystery/thriller. From Google translate:

I'm wishing him much success with his book, and future career. He is also a very accomplished pianist. 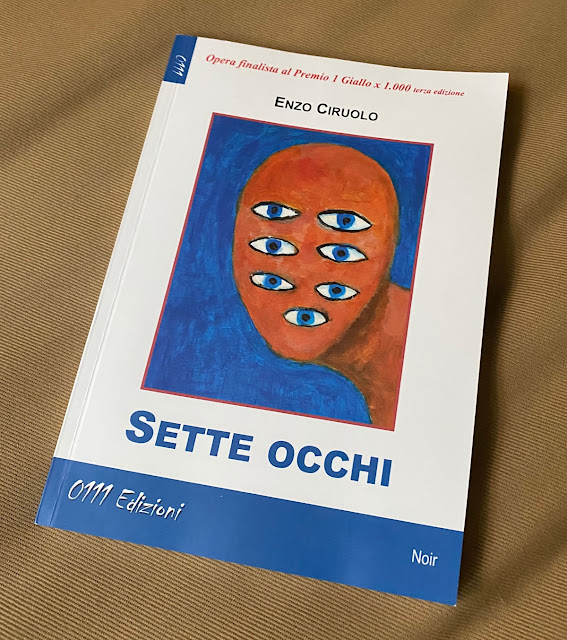 Posted by William T. Ayton at 6:51 AM No comments: 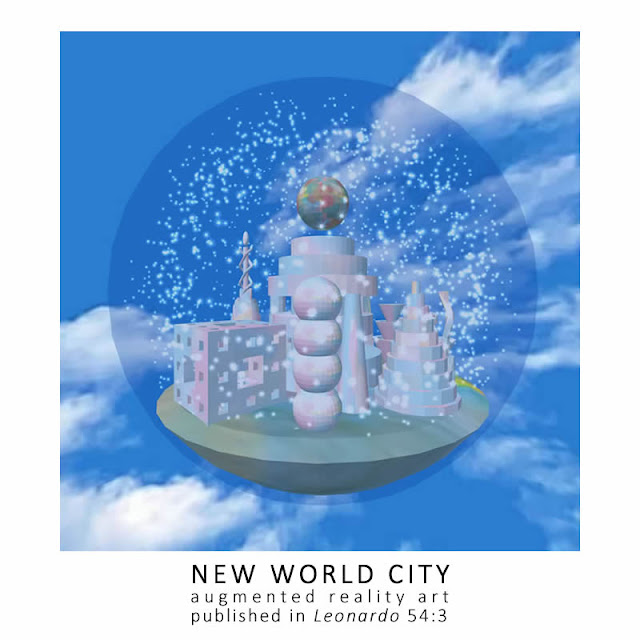 Posted by William T. Ayton at 9:30 AM No comments:

Here's the augmented reality project I've been working on recently. This is a new, "portable" version of New World City, originally conceived as a large-scale outdoor AR installation. This uses many of the elements of that piece in a small-scale marker-based piece using the A-Frame software framework. This means that you will go to a web page, be prompted to allow use of your camera (phone or computing device) & the 3D imagery will pop up when the marker is recognized. This is currently nearing completion & I'll put information here about the final piece when it's ready.

Posted by William T. Ayton at 7:08 AM No comments:

The Isle of the Dead by Daylight

This is a new VR piece I've been working on in Blender (3D) & Unity (game engine/VR software). I've long been fascinated by Arnold Bocklin's iconic painting & have done several smallish pieces that have either been versions of it, inspired by it, or contain it as a minor element. Here, I've turned my interpretation/re-imagining of it into an explorable VR environment. For the moment, it exists only as a file on my computer, but I'm hoping to make it more widely available.

The sky is from a free skybox, via AllSky, by the way, I didn't make it.

The Lost Cities of Mars

This is a VR piece I've been working on recently in Unity (game engine/VR+AR program) & Blender (3D modeling). It ties together a number of themes & ideas inside a handy alien environment. I'd like to develop it further, making the portal teleport to various areas of the piece, adding sound/music & perhaps other features. I'll mention here if these events come to pass. You can also see a video walkthrough, recorded from inside the Oculus Quest headset here on Flickr.

The themes involved include, time, eternity, the beginning & end of civilizations, what it means to be human, what it means to exist in the universe, the idea that everything that has happened in our world may have happened elsewhere long ago (or again in the future)...and many others...

The Temple & The Shrine: Atmospherics in Blender

Recently, I've been teaching an Intro to Blender (3D software suite), which has been helping me to integrate the software into my art practice (as well as helping the students learn the software, of course). Last night I was experimenting with volumetric lighting (light through fog, etc.) & found ways to make the rendered images more atmospheric. This was a missing part for me, & seems to be helping to create the worlds I want to make.

Posted by William T. Ayton at 5:07 AM No comments:

I just did an Internet search & found that this piece, which had been in a private collection, sold at auction recently (November 2020). I hadn't realized that the owner had passed away. I pulled the image from the auction web page...it's a better photo than I had before.

From the listing: "depicting figures reaching out of a torso with the limbs of other figures around and reaching towards it, all set before a cloudy, rocky landscape; signed and dated 1993 lower right."

Posted by William T. Ayton at 1:07 PM No comments:

From the final days of 2020, I did a small number of ink drawings...here is the one I probably like the best, the title is a meditation on parallel worlds or alternate universes, or something like that...