This small painting is the first UDHR (Universal Declaration of Human Rights) image I've painted in around 16 years, I think. As this is the upcoming 60th anniversary of the UDHR, I thought I'd maybe revisit some of the images & themes. 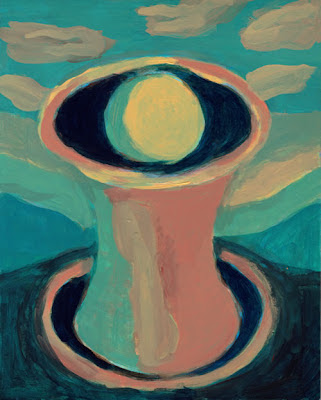 The name, "the vessel" was coined by a Brooklyn (at the time) friend, Jeanne C. Finley. The vessel itself is a symbol that appears & morphs throughout the UDHR series. It is simultaneously a scroll, a beacon, an eye, the letter "i", a symbol of hope & human rights, and probably many other things.
Posted by William T. Ayton at 6:04 PM