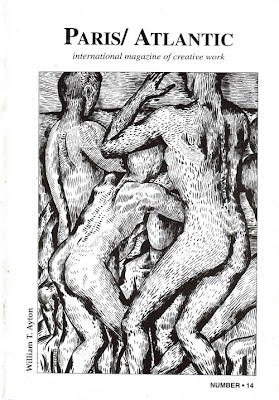 Thanks to our friend Hall Gardner in Paris for sending this along. This was my first cover on a literary review, which I didn't learn of until 6 or 7 years later, around 2000 or 2001. When we left Paris in 1994, we left some copies of artwork with the editors of Paris/Atlantic at the American University of Paris. I finally discovered that some of the art had been used, including this piece ("Watching the Horizon", 1993) on the cover. I used to have a single copy of the magazine, but lost it somewhere moving between houses. It's probably in a cardboard box in my basement. Anyway, Hall just sent me 4 copies, so many thanks to him. And, don't forget to check out his collection of poetry, "The Wake-Up Blast", published by Narcissus Press.
Posted by William T. Ayton at 10:47 AM