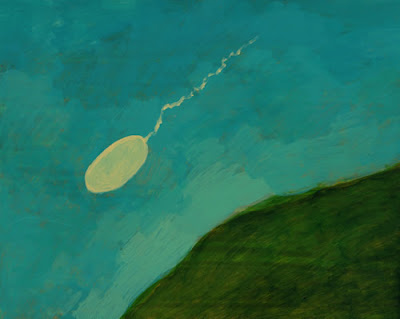 Above is my recreation of something I saw in the sky in the early 70s. It's not really meant to be an accurate representation in a scientific sense, as it was a long time ago & I can't really remember the time of year or exact atmospheric conditions, etc. Also, apart from the details visible in this image, there were really no other details visible on the object (no windows, no flashing lights), whatever it was.

I was sitting in my seat on the school bus in north Yorkshire on my way to school in the morning. I looked out of the window & there it was, kind of hovering there with a twisted "vapor trail" kind of thing. My immediate sense, based on nothing beyond simple observation of the phenomenon, was "it's hurt". I kind of felt that this thing I was seeing was a living being rather than a craft of some sort. That was my reaction.

I didn't alert the other kids to this. I was a shy kid myself, & for better or worse, I didn't think the others would be "ready" to see it, whatever that meant. As far as I know, no-one else noticed it.

I don't know how far away it was or how large it was. Quite large, maybe. Definitely not huge.

It was not moving as far as I could tell, just there in the sky in a stationary position. A few minutes (5 or 10) later, as the bus had moved on, I saw it (or another, similar one) much further away in the sky, a whitish dot.

I have no real idea what this thing was, other than maybe some kind of living thing. I don't think it was an extraterrestrial or interdimensional or time-traveling craft. I shall probably never know.
Posted by William T. Ayton at 8:01 AM