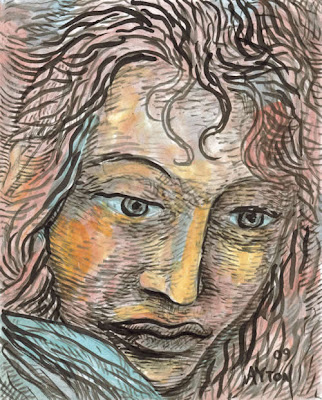 The piece wasn't quite working until I added the acrylic color washes. Now, I think it's much better.

Fata Morgana (aka Morgan le Fay) was the shapeshifting half-sister of King Arthur. This piece came out looking unexpectedly Pre-Raphaelite, which made me think of Arthurian legends & so on. Maybe I'll do others...

Apparently, a Fata Morgana is also a type of optical illusion or mirage.
Posted by William T. Ayton at 9:25 AM