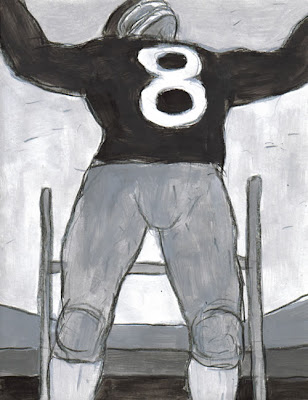 The character above is not really a main character — the "hero" is a sports writer with problems, so the football player is part of a story he almost gets to cover. I don't know much about American football, or sports in general, so it's a bit of a challenge, or rather I tend to invent what I don't know to a certain extent...the book/blog is drawn & painted in a monochrome, somewhat expressionist style, which is looser than a lot of what I've been doing lately.

Each chapter has 20-30 images, so it doesn't go very quickly, but I hope to have the second chapter up in a few days time.
Posted by William T. Ayton at 7:03 PM