Right now we're (Donald Rothschild & I) working on the next instalment of our noir-novel-blog-collaboration, Shadow Bay: 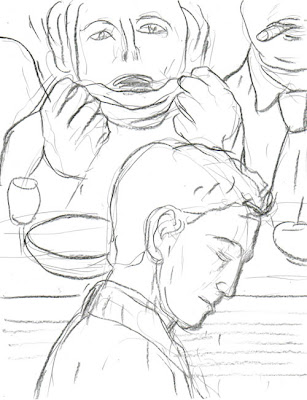 That's an unfinished line drawing that will be painted & detailed in acrylic for a scene in a restaurant. The blog/novel has been on hiatus for a while, due to vacations & other stuff, but it's time to get back to work on that. I hope to be posting the finished chapter fairly soon.

I'm trying a slightly new (for me) system with the artwork in this chapter. Previously, I had done each image one by one, more or less finishing one before moving on to the next. This time, I'm doing fairly loose line drawings first, so that any edits can be ironed out at an early stage, then going back & painting the tones & details in. We'll see how it goes. I'm still at the early drawing stage.

The other good thing about Shadow Bay is that it keeps me out of a rut in that I'm creating images that I wouldn't normally think of, as they're dictated somewhat by Donald's written script. It is a potentially huge project -- around 17 chapters with 10-20 images per chapter (or more.) Do the math. Still, we shall see how it goes.
Posted by William T. Ayton at 4:08 PM