A few notes about the Souls sketcbook

I just wanted to jot down a couple of ideas here:

2. The light brownish color of the pages appeals to me. It reminds me of Art Brut or Outsider Art works done by people in obscurity, poverty, mental institutions, etc. It also suggests cheap materials, impermanence & so on.

3. While this is a sketchbook, the pieces in it tend to be somewhat finished. While I like "true" sketchbooks filled with random ideas & half-finished thoughts & fragments, I tend to finish things. While some of the images are definitely better quality (on various levels) than others, they are mostly fairly well conceptualized artworks.

4. This is the third such sketchbook I've done (in this physical format.) The other 2 were done in 2006-2007, being titled "Nov-Dec 2006" & "Hell 2007". All the sketchbooks have the same number of pages, I believe, being 158, as far as I can tell. I've only scanned in a small number of images from the first 2. I just looked through them & there are many other worthwhile images, so I may scan those in in the near future. 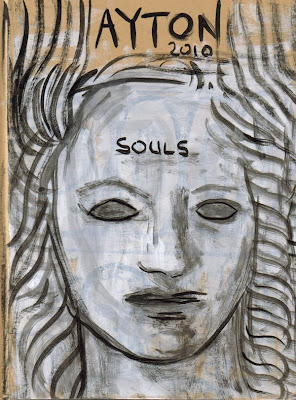 I will probably think of other things to say / write, but the above should suffice for now.
Posted by William T. Ayton at 4:58 AM