Since I'm on a roll starting this blog up, here's another image that has attracted some attention. It was featured on the back cover of Direct Art magazine (Fall 2005), and it also seems to come up a lot in Yahoo image searches. It's one of the darker images I've done, and was created for the following reasons:

1. I was having severe doubts about my marriage & life in general (still happily married as of the current moment)

2. Reflecting upon the nature of empires and how they necessitate fear, death & destruction to survive, especially as they start to decline. It seemed to me that the nascent US Empire (the Iraq occupation) was collapsing even as it tried to come into being

3. It was a general attempt to personify death. Two of my favorite artworks are Bocklin's "Island of the Dead" & Breughel's "Triumph of Death". In a way, it was an attempt to create the ultimate image of death. I don't think it was a total disaster. Plus, he looks quite happy, so there's also an attempt to remove the fear of death... 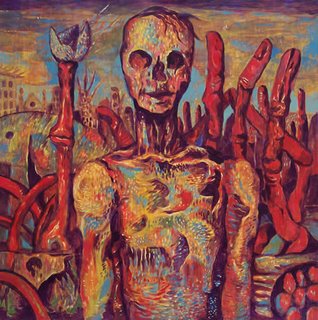