A new ink drawing of an armored figure: 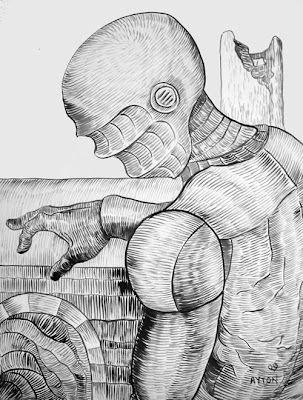 Biohazard, 2009, brush & ink on paper, 23.5" x 18". I like the idea of depicting armored figures, in this case the result reminded me of a biohazard suit of some kind, or some kind of futuristic protective garb. This drawing became an exercise in rendering, as much as anything, and an excuse to stretch my lines out over some relatively simple shapes.
Posted by William T. Ayton at 12:53 PM