A new drawing that came out better than I thought it might: 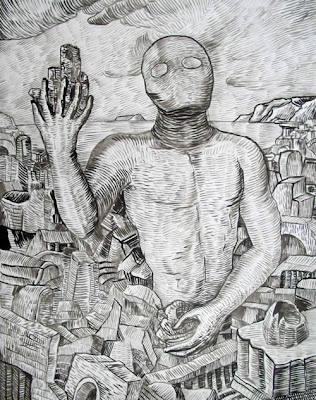 It has an endearing clumsiness that I like. Also takes me back to those early 60s (or late 50s, even) Jack Kirby / Stan Lee comics where a giant monster would be destroying a city while the terrified populace (or a half dozen of them) would scream out of the lower part of the image. I didn't put in the terrified populace. Also influenced by those Breughel paintings etc. where the landscape stretches off to infinity with a seascape & boats etc. I didn't put the boats in either.
Posted by William T. Ayton at 10:32 AM

Wow, I'm very impressed! Your art-work carries very strong messages, because it makes me feel something. And this doesn't happen often. Great respect!

But can I ask one question? Do you have any pieces with positive message? If there is, I would like to see them.

Thank you very much for your comments. My work does carry strong messages, and some of those messages are quite pessimistic, as I see much of my work as a warning against things that I see happening or starting to happen which are not good for the people on this planet.

There are pieces with positive messages -- most notably the series on the UDHR (the Universal Declaration of Human Rights), which deals with the rights & freedoms that all people have, or should have. Of course, some of those paintings show negative aspects of the situation, as I feel it would be irresponsible of me not to do so. But, mostly the images are positive, I think. You can find them at www.udhrart.org, as well as on other human rights websites.

There are also other pieces I've done that are positive, hopeful, beautiful, etc. If you go to my main website, www.ayton.net & look around, I hope you can find them. If not, let me know & I'll point some out.

In the future, I'd like all of my work to be positive. So, when I've finished solving all the world's problems (actually, long before then), I shall focus on making beautiful, positive artwork. I promise.