Böcklin's Isle of the Dead

While we're on the subject of Böcklin's Isle of the Dead (see previous post), I thought I should show the painting here, so that we know what we're talking about: 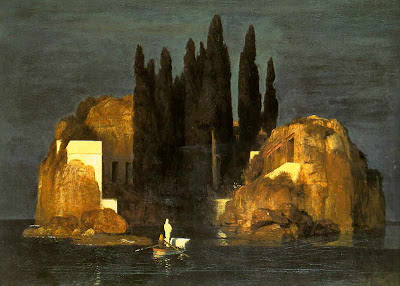 The power of the painting somehow resides in the combination of mystery & majesty; gloomy yet glowing lighting, the dark sky & water, the cypress trees & the shrouded figure on the boat, & the sense of stillness & the inevitable calm of death. The center of the painting is a dark void formed by the murky cypress trees. The piece is dense with atmosphere, and the work has become an icon of sorts to many.

As noted before, Pascal Lecocq's web site features the 4 still existing of the 5 versions that Böcklin painted, plus Pascal's own interpretations, and also those of many other artists, living & dead, ranging from almost straight pastiches to more imaginitive & obscure versions, homages & inspirations.
Posted by William T. Ayton at 3:55 AM