I just became Facebook friends with Pascal Lecocq today. Pascal is an artist ("the Painter of Blue") and runs a web site dedicated to the Isle of the Dead painting by the Swiss Symbolist painter Arnold Böcklin (1827-1901). The Isle of the Dead is a haunting, atmospheric picture depicting an island with rock-hewn tombs, cypress trees & an approaching boat with a shrouded figure, an oarsperson, and a casket, presumably bearing a body to be interred in a tomb on the island. It's always been a favorite painting of mine, despite Böcklin perhaps not being in the first rank, artistically speaking. He painted 5 versions of the image, of which 4 survive, and, perhaps more importantly, inspired many other artists (Dali, de Chirico, Max Ernst, to name a few) & composers (Rachmaninoff, Reger, Huber) to create works based on or inspired by the Isle of the Dead. 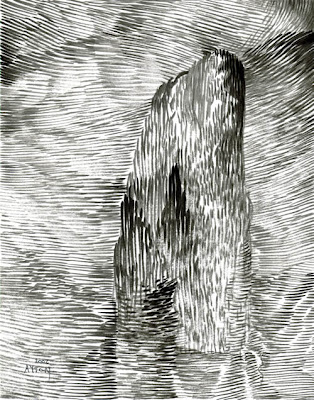 A few years ago, I sent Pascal a drawing entitled "Homage to Böcklin", for possible inclusion on his web site. For some reason, the drawing languished in a pile of things to do. However, today, after we became Facebook buddies, I resent the image, & it is now on his web site here. So, please visit his site, & see the work of Böcklin, as well as many interpretations by Pascal himself, and many other artists. Thanks again to Pascal for putting my drawing on his site.
Posted by William T. Ayton at 3:07 PM